The University golf course was first envisioned in the early 1930’s when Coach Wallace Wade, Coach Eddie Cameron, and President William Preston Few inspected portions of the Duke Forest and discussed the desirability of a University course. Later, the idea was supported strongly by President Hollis Edens and, during his administration, the course site was reserved by order of the Board of Trustees. By 1941, actual plans were drawn up by the renowned architect, Perry Maxwell, on a site that is now the location of the Duke Faculty Club. The original golf course construction was planned to begin prior to World War II, but when Japan bombed Pearl Harbor in 1941, the plans were put on hold by Wallace Wade, Duke’s Athletic Director.

At the conclusion of the war, the plans resurfaced and the present site of 120 acres was selected. The property was carefully chosen for its unique blend of unusual elevation changes throughout its mildly rolling terrain. This site would be worthy of major championships and was planned to have its fairways free from the suffocation of surrounding home sites. It typified the Piedmont of North Carolina at its best, sprinkled with meandering streams and blessed with a variety of hardwoods, towering pines, and beautiful shrubbery. Duke University sought out Robert Trent Jones Sr., whose golf course design work was widely respected. Even in 1955, Robert Trent, working out of Montclair, New Jersey, was quickly becoming one of golf history’s most influential architects. Dumpy Hagler, Duke golf coach (1933-1973), put it simply: “He was one of the best designers in the whole world.”

“The routing of a course is the most important element in design. Designing a great course is like putting together the pieces of a jigsaw puzzle. In almost all cases, it is best to let the land suggest the course. Don’t abuse the land, use it. Fit the holes into the terrain available, moving as little dirt as possible. The great architect should create the illusion that the golf holes were on the ground just lying there, waiting to be grassed over.”
Robert Trent Jones Sr.

Finally, on September 26, 1957, Duke University Golf Club opened to the public. Records indicate that the Board of Trustees viewed the ceremonial dedication with much interest. President Eden hitting the first ball from the number one tee box highlighted the event. The ‘new’ Duke course was immediately labeled as one of the top university golf facilities in the nation. The attention was great enough to attract the1962 men’s NCAA Golf Championship. Ironically, there was a soon to be famous golf course architect playing in that NCAA field from Yale University. His name was Rees Jones, eldest son of the Duke golf course designer.

In 1988, (twenty six years later), Tom Butters, Duke University Vice President and Director of Athletics, recognized that the golf course desperately needed restoration. The passing years had been less than kind to the once incomparable Duke layout. The compacted greens and fairways were struggling to grow grass, its tees were badly worn, and the sand bunkers were in need of repair. While no one denied the magnificent routing of its holes, the condition of the course had become unacceptable by Duke University standards. The Board of Trustees approved an endowment program that was conceived and developed by Tom Butters for the purpose of funding the restoration of the Duke University Golf Club to the position it had once held – “an outstanding golf course design in excellent condition.” The five-year plan necessary to achieve this goal was put in place, with the final major construction to begin in June 1993 and be completed by April 1994. 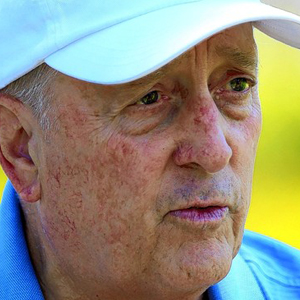 The final phase of the plan called for an architect to improve and re-grass the landing areas along with the complete redesign of the tee and green complexes. Rees Jones, now a master architect in his own right, was the only choice for this redesign. Rees had completed renovations for several U.S. Open venues such as Brookline, Hazeltine, Baltusrol, and Congressional. In modern golf course architecture, Rees has set a new standard for clarity and playability in design. He terms it ‘definition in design’ with the holes clearly indicating how a golfer should play them. The natural beauty of the land was integral in his design work and his vision unified by directional bunkering, visible hazards, and accessible target greens. What a perfect fit for the Duke University Golf Club!

It would be difficult to describe the loving care that Rees Jones puts into the design of each and every golf course feature. He is a demanding perfectionist who insists that future playability of his work be held at a premium. Throughout the redesign, Rees scrutinized every shot possibility, observed and considered every angle so as to ensure that each nuance of the golf course would be subtle, yet perfectly placed.

Duke University Golf Club exists for you to play, enjoy and savor the vision of Jones and Jones. It is a work of art that is a singular masterpiece and one that will leave you with the distinct impression that, indeed, in Robert Trent Jones Sr.’s words, “…the golf holes were on the ground, just lying there, waiting to be grassed over.”